Rome is burning, while Nero’s fiddling away!

My heart is so heavy and saddened by the riots in our land. Lawlessness is rampant from the top down. We have become a nation filled with lawless ones. One Nation Under Lawlessness!

One of the nights while Baltimore burned, I had disturbing dreams. It was about aggressive, intimidating men, filled with strife and violence. I know it stemmed from watching news clips, but I just couldn’t shake it. At one point during my dream, I walked into a room packed with men – actually, they were thugs who were ready to erupt. The clothes they wore were for urban warfare and they were seething for a fight.

The next morning I turned to God to still my heart. I looked to Him to settle my fears. The first set of scriptures He directed me to disturbed me even more, and I don’t want to write about them right now. But I do want to discuss the second set of scriptures He led me to. It was Romans 13. Romans 13 speaks of respecting authority because all authority comes from God.

Casting off the Restraints of Authority 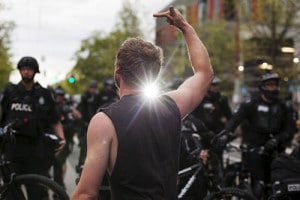 The truth behind these events is this: we’ve cast off from our hearts the restraints of God, so now we’re unable to submit to the human authorities He places over us. Lawlessness runs rampant because in the secret heart of man, we are resistant God. These flash bombs, fireworks, broken glass and burning towns are not from resistance to man, they’re from resistance to God. I’m not saying God condones the abuse of power. In our society, the abuse of power is held in check when our justice system addresses it. I could give you a list of power grabs I’ve heard of and witnessed, and you probably could do the same for me. But I am tackling this as a whole, not as an event. I am not speaking of one person or even multiple people being abused by authority. I am speaking of the whole climate that set this scenario up in the first place. We have cast off the restraints of our God, because we didn’t want His rule over us. It is His authority we’re trying to shake off.

But some of his people hated him and sent him their declaration of independence, stating that they had rebelled and would not acknowledge him as their king.
Luke 19:14 TLB 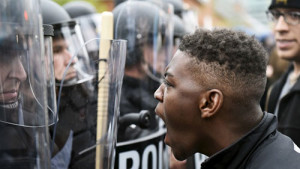 I’ll have no ability to submit to God-given authority when I resent and resist God’s actual authority in my life. In this rebellion, godlessness, anarchy and unrest thrive. We’re not witnessing bad cops gone wild nor rebellious youth in an uprising. We’re bearing witness to the result of man’s casting off restraints. This is what it looks like when we are working to be free from God’s rule. This is the direct result of telling God to shut-up. 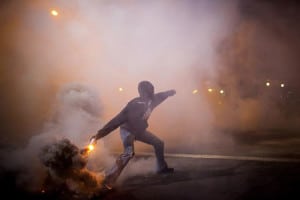 We are witnessing rocks thrown at God, cars and buildings set on fire to spite God, and the murderous abuse of God-given power on the part of human authorities. If there’s no authority that’s in place but by God’s own direction, then God is to blame. Our fight is with God!

No, this post won’t go viral because we want this whole thing to be about man, not God. I can fight, spit at and revile a man, but God? My rocks can’t reach Him. The reality is that our nation is burning from our resistance to God as God. We have clothed ourselves in the garb of war against God. It’s His rule we are fighting against in our hearts. 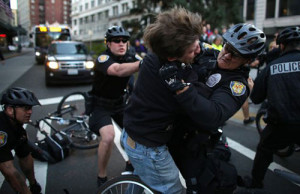 The entire climate of our country is the result of man being mad as hell that God is actually God. We’re infuriated that He has the audacity to reign in our lives. We’re witnessing daily the fruit of a culture that has been so blessed by God that now we feel we don’t need Him, nor do we want His meddling influence in our lives and choices.

Instead, clothe yourself with the presence of the Lord Jesus Christ. And don’t let yourself think about ways to indulge your evil desires.
Romans 13:14 NLT

Authority is a vital subject we each must face and deal with in honesty and clarity. Watchman Nee’s Spiritual Authority cuts to the chase and pierces the heart of the subject.

And once again John your post has prompted me to go deeper. I have pulled my very yellowed copy of Nee’s Spiritual Authority from my bookshelf and am reading it again with fresh eyes. Thank you dear brother for leading me to these wonderful truths that are new every morning.

How God must hurt! There was a message, years ago, by David Wilkerson. He was relating the torment he was going through due to some slanderous, hurtful gossip about him and his associate pastor. “‘Where are Your righteous judgments? Why do You wait so long to bring about justice?’ The Lord answered, ‘David, I am merciful, longsuffering and slow to anger because it pains Me to mete out My justice. If you could feel My pain, you would never, ever, desire to see My judgment fall. You would understand why I wait so long to bring it down!’ This is… Read more »

Thank you Shulamite for addressing these issues so that these matters are resolved in our hearts and understanding for the days ahead. How can we submit in faith and confidence in Him otherwise?

That last verse verse you posted is so amazing! I will think about it today. Isn’t it crazy that even though we are not bound to any institution, that our rebellious attitude toward human authority is actually expressing our rebellion towards God!? There have been protests and violence in our city too these days… I told my kids that that is the true picture of our society. We humans are not civilized. Just because we have made hospitals and put asphalt on our streets, it doesn’t mean that we have become good and respectable… Our hearts have not changed towards… Read more »

Yes, there is a huge problem with anger and rage toward God and toward authority. There’s also a huge love gap between those of us who live in nice homes, drive nice cars and don’t have to worry about our children being mistreated by police… And those who do not have these same comforts. I think prayer and love are the answer. Washing one another’s feet from the dust of this world system that is sometimes unfair and unkind. I’m wondering how we can love these thugs to Christ and pray for their salvation and deliverance. Jesus never condemned sinners… Read more »

Oh yes John. And add to that the disregard for parental authority. I read a news clip yesterday where a well-known 22 year old actress said that kids today cannot be free to be themselves because they are under their parents’ rule. Yes, the spirit of lawlessness is loose in our land, BUT greater is He Who Is in us than he who is in the world. Our God Reigns.

Bingo, John…you NAILED it!! The anarchy in our nation is our rejection of God’s authority!

John, this is a worldwide move, at least in the West. There is a growing wave of rebellion and anarchy in the Western world, which is the manifestation of the “beast”. This is taking many disguises though. It is hidden in the agenda of many lobbies. The spirit of “entitlement” you talked recently is behind it all. Sure, there is rampant injustice and unfair events take place daily, but the way to confront them is pure hate against God, irrational in most cases… demonic too. It is not turning to Him, but attacking head and toes any hint of authority,… Read more »