Unbelief is my Achilles’ heel. Satan knows that as long as he keeps me wrestling with my system of unbelief, he has me beat. The life of the old nature is a lie for the new man! If my beliefs are captured in my old system, I’m entangled and ensnared. The enemy intends to enmesh me in the fruitless activity of wrestling with my old nature. This is a pointless and futile fight that leads to depression and despair. And the trap is set because of its effectiveness. If I’m wrestling with the old man, all my energies are spent and wasted. Additionally, if I simply sink beneath the impossibility of the task, I enter into a dark cloud of despair. Either way the enemy has won; I am not living victoriously.

Defeating Unbelief About My Authority 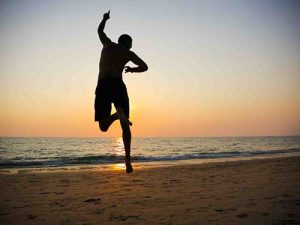 The reality is this: I have the authority and I can use it. No matter what the circumstance looks like, my struggle is a lie. The new man doesn’t wrestle with the old nature. If I’m wrestling, then I’m trying to perform my task from the old nature. It’s like two hungry old men with a single set of dentures. As long as I am convinced it’s real, I will continue to wrestle it out. Yet Christ’s statement on the Cross was, is, and always will be, “It is finished!” This states that it is done, NOW.

Remember, I don’t have the power in myself, but I do have access to Him who is Power. When I saw the magnitude of authority that I have to overcome the old nature, I can’t say I wasn’t shocked. My unbelief kept me running around the mulberry bush for years. To see that the work is not only done but completed for me – WOW. The only thing that remains is removing the veil of unbelief. If we can only believe that it is all a facade of lies. I have been given my life. I’ve been born from above and I have His very Life and authority to live that which He requires. All that remains is the faith that what He says is true—IT IS FINISHED. A fight we’re all required to engage, this IS our only work.

So simple! Thank you. I don’t get the dentures analogy, though. ??

Hehehe, I had that visual when I was writing this. If you’re wrestling the old nature with your old nature it’s like two hungry old men wrestling with a single set of dentures. The old nature is always hungry and always fighting, and like a toothless old man has no actual bite. The old nature is all bark no bite but this doesn’t prevent me from fighting to get some teeth in order to try. The hope for an analogy is its clarity, so sorry this one wasn’t clear to you. I’ll try harder next time.

Thank you. That was very helpful.

It’s a choice to believe, isn’t it? Isn’t that how we defeat the unbelief that loves to hang around by choosing to believe we are dead and Christ lives? This is exactly where I am at right now, thank You, Lord, for sending this message through John.