Witches across the country gathered together at midnight on Friday to cast a spell on President Donald Trump seeking to remove him from office. These witches have pledged to cast a spell under each crescent moon until Trump is no longer president. The next few crescent moons take place on March 26, April 24, May 23, June 21, July 21, and August 19. This group of witches are attempting to use black magic to neutralize U.S. President Donald Trump by casting a “binding spell” to prevent him from governing.

These are the facts as the media is reporting it. And it is not just witches (thank you Dennis) or even Satanists doing this; there is an open door to those who feel disenfranchised by Trump’s win of the presidency. Yes, people who feel powerless are looking for a way to gain power. And unwittingly they are playing into a grander scheme. You can’t curse authority and not reap disastrous consequences of the cursing. 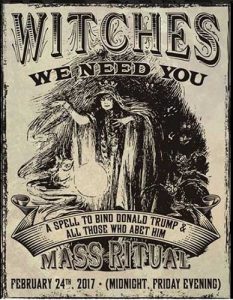 This whole course of events is a win-win for Satan. Here’s how. The enemy is using these people to curse our authorities and leadership. Regardless of our personal feelings about Trump as a person or as president, he is now our authority. The word says, there is no authority except that which God has established (Romans 13:1). So if God established Trump as our authority, it is ultimately God they are cursing.

Consequently, the one who resists authority is opposing what God has set in place, and those who do so will bring judgment on themselves.
Romans 13:2

Reviling authority is no joking matter. If you look in the Old Testament, cursing authority results in leprosy, Earth swallowing, plagues and death, to name a few. In the New Testament, blindness, degradation, and dropping dead are the result. So why is it a win-win for Satan? Because the devil wins regardless in this situation. He wins by hindering God’s delegated authority and he wins by the destruction that these cursers will reap in their own lives.

You can’t curse authority and not reap disastrous consequences. And cursing takes it so much further than mere murmuring. To complain against delegated authority is bad enough but to literally speak curses against our delegated authority is to unleash a whirlwind of destruction back upon our own lives. I shudder to think what will ensue in the lives of those doing the cursing. The devil’s goal of stealing, killing and destroying is achieved in this. Satan loves to involve God’s own creation in bringing about an implosion and this situation is a debacle of destruction. Everyone loses except the devil.

You shall not revile God, nor curse the ruler of your people.
Exodus 22:28 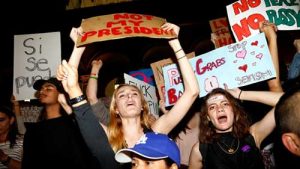 In Spiritual Authority by Watchman Nee, Nee writes, “Whenever there is rebellion and reviling among us we shall lose the presence of God…” He also says, “No one can reject God’s delegated authority with one hand and receive God with the other hand.” This is frightening because it means the progress of a man’s spiritual life is halted when reviling is present! Again, Satan wins.

The witches are casting binding spells to bind Trump and his administration from governing our nation. This will lead to them being bound as well. I hate this twisting and chaos, as it only separates and divides our nation. I wish it was just an offshoot of our culture, but it is masses of people. Look at the protests and protestors; are they not cursing our delegated authority? Just because you don’t join an organized spell-casting on a particular day doesn’t mean you’re not cursing. Mercy, Jesus, mercy!

Martha is writing a booklet on binding and loosing prayers. This message was actually one of the first Messages of the Month released back in 2002. I am so excited to see it produced as a booklet. Couple this with the companion book she’s writing on spiritual warfare and we are in for a treat! We, as Christians, have been given the true power of binding and loosing for the Kingdom of God. I am praying against this destructive storm of rebellion, and I would love to hear if you too are praying. We need wisdom and protection for our leaders, light and liberty for those bound in bitterness and cursing, and the blood of Jesus to cover this disaster as His Spirit sorts it out.

Remind the believers to be subject to rulers and authorities, to be obedient and ready for every good work, to malign no one, and to be peaceable and gentle, showing full consideration to everyone.
Titus 3:1-2

This post is so succinct and powerful in just its posting. Oh, what an encouragement not to only believe but trust in all that Christ accomplished on the Cross……if anyone would like more on this incredible fight of faith they could go to LivingChristianBooks.com and order your teachings “Experiencing the Depths of the Lord’s Prayer” and “The Power of Prayer” CD series by Martha. All these that you have shared are pointing us to truly submit to His authority and stand on what Christ accomplished.

May the Lord continue to bless your teaching and writing for HIS glory.

A few of us meet once a week for this sole purpose — it is not an option but a biblical command that many times I took lightly. The sense of urgency in our prayer life is possibly an understanding that we “do not wrestle against flesh and blood, but against principalities, against powers, against the rulers of the darkness of this age, against spiritual hosts of wickedness in the heavenly places” (Ephesians 6:12). The prince of darkness is grimly and powerfully at work in world affairs, and prayer is a great battlefield especially as we pray for those in… Read more »

Can’t wait for the booklet. Thank you for this post. I do pray every day for our President and all government. It is almost compelling, more than I ever felt before. Love you John

I feel the very same way. I have prayed for our leadership prior to these days, but there is somewhat of an urgency now. Love you Wanda!

Great post, John. Along with you I am committed to praying for our leaders.

I’ll be first in line to order her booklets John. You know how I love Martha and you of coarse. Words of life xoxoxo thanks for the post!

After reading your blog entry today, yes, I am praying for your new Administration.

In fact, I had never felt this impulse to pray as of the moment of now for a president of the USA, and this is probably due to the great spiritual opposition in the air.

I am not seeking prayer, prayer is seeking me on this… and I am not a prayer warrior, just a very normal sheep.

This may seem like a minor point, but it’s actually important: As a believer who ministers to neo-Pagans, New Agers, etc, and who has lived in Salem MA and has several friends who are witches, I need to point out that witches are not satanists and generally don’t like satanists. In fact, when a satanic temple opened last year in Salem, all of the witches I spoke to about it were NOT happy.

The post is bold enough on it’s own. Though it isn’t the point, I don’t need to factually misrepresent. Thank you for the distinction, I was unaware.

Thank you John for this. I was totally unaware. I will be praying.
We need to remember to not stop short in our prayers. When we pray for the binding of the demonic/evil spirit we must also remember to pray for the presence and power of the Holy Spirit to be loosed.
(Matthew 12:43-45, 16:19 & 18:18)

I can’t wait for you to get the booklet Binding and Loosing by Martha. I really think you are going to love it. Love you muches, thank you for you!

Thank you for the reminder, Tammy.