I’ve always been amazed by what all Creation teaches us. Let me share with you a recurring wonder I have with it. 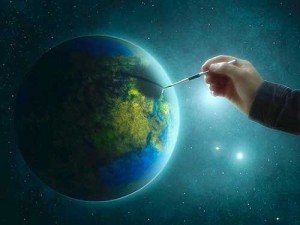 God created the heavens and the earth and everything that lives. At the end of His creating He said, “It is VERY good!” He made a masterpiece of the world and universe we live in. It was blessed!

Then came man, made in God’s image. We roamed the earth and were given preeminence over all Creation. We were able to walk in the cool of the day with God, our Father, in unbroken fellowship. It was beautiful! But then came the day that we fell.

As a result of our choice and fall, all of creation was cursed along with us. Its fruitfulness and flourishing gave way to thorns and thistles. On that day, death and decay permeated everything created. That which was blessed and VERY good, bore the scars of our choice against God. Yet did Creation turn against us in revolt and bitterness? No, the Word says that all Creation longs for the sons of God to come into glory. Creation literally groans as it waits to see us reunited with God in perfection.

For the creation eagerly waits with anticipation for God’s sons to be revealed.
Romans 8:19 HCSB

Everything on earth is subject to our fall. Nature itself was subjected to our evil choice and yet lives in hope and anticipation. Imagine, hope reigns supreme throughout all creation even in the face of our evil. The earth didn’t swallow us whole in a vengeful act for mangling its form; no, it teems with expectation for the day that we and it will be liberated in newness.

For the creation was subjected to futility—not willingly, but because of Him who subjected it—in the hope that the creation itself will also be set free from the bondage of corruption into the glorious freedom of God’s children. For we know that the whole creation has been groaning together with labor pains until now.
Romans 8:20-22 HCSB

The Story of All Creation and Our Today 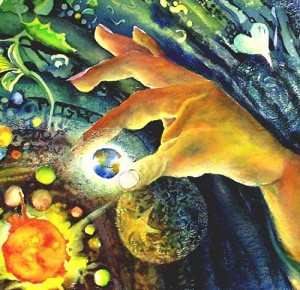 So, how does this relate to us today? Because “The Story” is the same in the microcosm as it is in the macrocosm. The Creation Story is reflected in our personal lives as well. In the same way that Creation was hurt by our choices, other people’s choices have and do hurt us deeply.

Whether through ignorance, or in willfulness, or with malice, we are wounded, scarred, and crippled by the choices of those around us. Be it parents or siblings, spouses or children, authorities or friends, we are wounded and sometimes irrevocably. And this happens in both directions. We wound as much as others wound us. But here is Creation standing as an ever-present sentinel, a beacon for hope. Creation bowed to the Sovereign Hand who subjected it to man, and now it groans and waits for the redemption we all seek. Which one of us hasn’t also had to personally twist in the wind of adversity, waiting for our Redeemer in Glory to come?

This fact could sink us emotionally if we didn’t have the sustaining power of the Spirit of God. It’s too much to bear on our own. But the good news is we were never intended to. Our Savior came to heal the breach, and He left the Spirit to be our Life. It’s true, without Him it is impossible, unsustainable, and devastating. But the story of His Redeeming Love is sung throughout Creation—all Creation calls, waiting patiently without bitterness, malice, or scorn.

This is our lesson and our life. We are each called to receive our bruising, accept our crippling and groan with all Creation for the end of the age.

Am I a pessimist? A gloomy Gus toting a “Life’s a bummer and then you die!” bumper sticker? No, on the contrary, I know that God has subjected me and I have been maligned by the choices of others, but I am called to embrace His sovereign choices and not take up bitterness against those who have sinned. Others are also the recipients of my sinful choosing – may they have the grace to embrace our Sovereign God.

All Creation has a lesson to teach us. It has a vital call for us all. Surrender to the Hand of our Sovereign God and eagerly wait and groan for His Sovereign Hand to liberate us all. Oh, how often I have taken up an offense and become bitter, writhing with resistance rather than groaning with anticipation. It’s a life or death choice—one we each have the grace to face.

In my opinion whatever we may have to go through now is less than nothing compared with the magnificent future God has planned for us. The whole creation is on tiptoe to see the wonderful sight of the sons of God coming into their own. The world of creation cannot as yet see reality, not because it chooses to be blind, but because in God’s purpose it has been so limited—yet it has been given hope. And the hope is that in the end the whole of created life will be rescued from the tyranny of change and decay, and have its share in that magnificent liberty which can only belong to the children of God!
Romans 8:18-21 Phillips

Tried to share from my phone yesterday while riding, it disappeared so I will try today, “I wanted to jump out of the car and shout ‘Hallelujah’. What (quoting Sam) a wonder you have shared. I have joined you in praying for acceptance and surrender of all that comes from our Sovereign LORD”S hands (this is WOW for me) to set us free as well as all creation that is awaiting the SON’s of God to come into our place with H O P E.
Love and blessings John for this beautiful revelation.

Wow… and wow. It is really a wonder you shared here. I love your vision, that Creation is NOT against us… but WAITING for us.

But here is Creation standing as an ever-present sentinel, a beacon for hope. Creation bowed to the Sovereign Hand who subjected it to man, and now it groans and waits for the redemption we all seek.

Thank you for sharing this vision, John. Really appreciated it. Love to you today.