I’m launching into a series of posts on a crucial topic. In order to keep the continuity of the message, I am going to post them back to back over the next week and a half. I trust the Father’s wisdom in this and pray they minister to you.

The issue of this series has the power of life or death to our destinies. I originally wrote on this subject in 2012, and I considered publishing it as a Kindle book. In that light, I asked someone very close to me to review and edit what I’d written. Instead, they murdered the message. It was clear they suffered from the very issue I had addressed, and all my zeal and joy for the material died with their ravaging.

After that, I gave it to others for review, and what I found is that this work was not only right-on, but also very powerful to deal with the subject. Since then, it’s taken me over a year to even desire that it be resurrected.  And as I sit with what I wrote, during a time of prayer and fasting, I’m asking for it to be birthed with new Life. I originally had such an amazing passion for this topic and believed the Lord was giving me tremendous insight and revelation for freedom.  I now simply trust the Lord with the timing of its release, as well as its demise and ultimate resurrection. I truly can thank Him now for the delay! Communicating it today will be so much better; I have grown over the past year and a half. I joked with Jennifer, if you’re using an “amazing” Ginsu® knife, you don’t need to scrunch up your face and push hard. I feel the delivery of this series of messages doesn’t need any forceful strength; the topic is strong enough on its own. It’s a now-word for the culture we live in, and here is why. 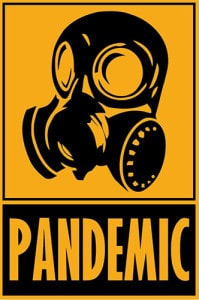 There is a chronic ailment that’s becoming an epidemic in our world—a deadly pandemic.  Our society is plagued with this issue. If we don’t experience it as we interact in our world, then we see and hear of its effects in our media.  This pandemic is on the rise! It celebrates the most bestial parts of humanity and rewards our lowest nature.  It’s the bane of human existence and a wall that stands against our experiencing the blessing of the Lordship and Sovereignty of God.  What is this pandemic? Entitlement!

If you want to see how the pandemic of entitlement manifests in the wild, you can look at how the media is reporting it. (The links below might be disturbing to some. They contain violent imagery. Please feel free to not follow the links!)

Now, these are extreme videos of entitled people as reported in the media. Imagine being entitled to another human’s suffering for your own amusement. That says, “I’m entitled to whatever I want, even at the cost of your wellbeing for my enjoyment.” Or in the other videos, these lost individuals are entitled to receive what they want and will get it no matter who it hurts or how they must act.

We can all recoil at these grotesque displays of godlessness.  Common decency is replaced with animalistic behavior. Mankind can so easily be worked into frenzy – none of us are immune. It shocks us and gains our attention just long enough to award the media outlet with advertising revenue.  And there’s probably enough distance from these acts, and us, so we can remain uninvolved. We might say, “Well, I’m not doing that!” But entitlement doesn’t just manifest itself in the hordes.  No, entitlements are seen in our littlest heart attitudes, and that’s where it’s the deadliest. In this series, I’m not writing about how entitlement hurts people in a one-time shot or singular event. I’ll be addressing the subtle entitlement that damages daily, for years and years.

* PANDEMIC – (of a disease) prevalent over a whole country or the world.
Come read the next part in this series
.

[…] this point in my journey, I was no longer merely desiring, I was now LOUDLY demanding with complete entitlement. I responded to the King of Glory, my Creator, with, “Well, that’s not much of a choice.” I […]

0
Reply
Declaration of Dependence | Get Along With God

[…] kind of leans back into my recent entitlement posts, doesn’t it?  Many hear the words “pursuit of happiness” as “our right to experience […]

I love this blog and can hardly wait from one day to the next to see how God will speak to me through you all. Thank You very much!

Amen John. Amen Andrea. If the time would not be shortened even the elect, if possible, would be so contaminated with it.

Agreed. This is a huge problem in our world. I am a nurse and have worked in Mental Health, and see this on a daily basis. I am looking forward to hearing the insights God gives you. Prayers for this to happen

He (satan) comes to steal, kill and destroy. Think globalist and how it filters down into mankind’s attitude and actions toward and at the expense of another’s. And we can have this attitude toward God. It stinks! Glad you are addressing this John.

I was very surprised last november when one morning I heard the the Spirit said: Black friday, before the pointed date and I got this sence that some tragedy will occur. Since that is not a popular comercial tradition here in Colombia, I could not grasp any idea what to do with that information and just prayed for my mother who was flaying that friday from Forida to Bogotá.
Now I´m really expectant to learn from that you already have. Praying

Looking forward to hearing more of this John. We’ve talked about this subject in our local body too! Ditto with Sam, May the Lord breathe His life on this message and prepare our hearts to hear.

yes, I totally agree … I live in the capital city of this land, the seat of (man’s) government … over the years one “scandal” after another has surfaced, most in the financial arena and the response to the exposure time after time has been “I’m entitled”‘, “I’m owed this” …this entitlement sadly has crept into the church, into our way of thinking, our way of living, and it for sure, affects how we treat one another … it is a dark heart rot that must be fully exposed and displaced with the Light of Christ … I speak blessings… Read more »

Amen Andrea, I agree with your blessing and request.

I can hardly wait for more! I join you in prayer for there to be resurrection in the hearts that read this. It IS timely!

May the Lord resurrect this with His Life