I’ve never seen in the story of Nicodemus that Jesus was saying that not only did he needed to be born anew but that he needed to count as a wash everything from his past. That was why the confrontation was so boggling to Nicodemus, because He was a Pharisee. He was well versed, had great knowledge, was respected in the Sanhedrin, and Jesus was saying, “I just want you to leave all that and start over with a new Life.”

I’ve seen this portrayed in the “The Gospel of John” movie by the Visual Bible. Nicodemus encounters Jesus and each time he always has such a sweet face toward the Lord. It was a precious expression of knowing. In every one of Jesus’ confrontations, Nicodemus smiles at Him to one extent or another. At one point, Jesus is tearing the Temple up and the movie pans over to Nicodemus and this twinkle runs across his face like he was thinking, “I know He’s right.” Later when he’s talking with Jesus about being born again, he just has this smile. 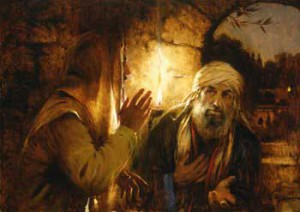 I really do think Nicodemus was joying in the fact that Jesus checkmated him.  I am not saying this was not a death to a man who amassed so much. But he came to Jesus seeking and could rest in the fact, “Wow… I’ve been checkmated.”

I say this because it seems all these personal encounters so affected Nicodemus that he would take Jesus’ dead body and bury it.  What an honor God gave him and what great respect he must have had for Christ at the price of possibly jeopardizing his own personal standing in the community.  “What? Are you going to take this blasphemer’s body and put it in a decent tomb, one worthy to be thrown into a pit?”

Think, the man to whom Jesus said leave your old life to be born again, now has the privilege to bury the earthly life of the One who came to set him free from his earthly life.

I think there was a real joy in Nicodemus’ heart that he was checkmated. I’ve never said it that way but that’s a cool way of seeing it. And what was said to Nicodemus in John’s account is now a famous verse,

“For God so loved the world that He gave
His only begotten Son that whosever believes in Him
should not perish but have eternal life.” John 3:16

I’ve never connected this passage and the following one. I know there part of the same dealing, but I never made the connection.

“Humans can reproduce only human life,
but the Holy Spirit gives new life from heaven.
So don’t be surprised at my statement that
you must be born again.” John 3:6,7 NLT

Leaving it all, pleasant flesh or putrid flesh, it’s all a wash.  To be checkmated with no further moves but to rise anew, what a JOY!

[…] other day when John received an incredible revelation about Nicodemus, I saw the word “foundation.”  Jesus assaulted Nicodemus’ foundation, the life and religion […]